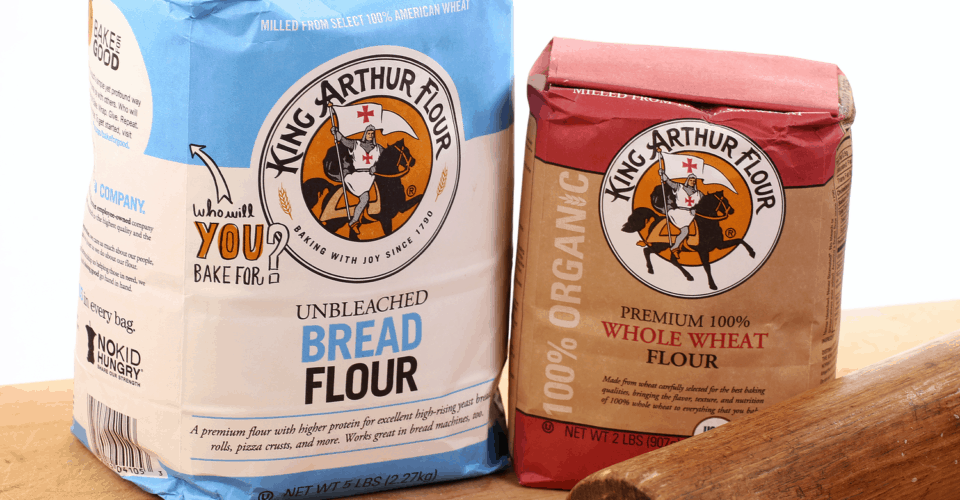 Started in 1790, King Arthur Flour, America’s oldest flour company, has evolved into an employee-owned and socially-driven organization whose mission is “to be the ultimate resource and inspiration in the kitchen, to inspire connections and community through baking, and to use our business as a force of good.”

In addition to flour, King Arthur’s products include a variety of baking mixes and wheat-free options. Its wheat flour is third-party non-GMO certified and is grown and milled exclusively in the United States. In addition to its commitment to the community and the planet, one of King Arthur’s primary concerns is the quality and of its products. The company is committed to responsible sourcing of ingredients with no bleach, no bromate, and no artificial preservatives, and its flour is milled according to the tightest flour specifications in the industry.

King Arthur Flour believes that baking can make a difference to people and to the world. Its social responsibility lies in its commitment to building stronger communities and providing broader access and connection to real food. It sources its flour from farmers within the United States not only to provide the highest quality but also to foster a strong and sustainable agricultural economy, and as a Benefit Corporation,  it works closely with its farmers, millers, and suppliers to benefit the planet and their commitment to sustainability as well as their profits. It has been recognized in Best for the World Worker and Best Places to Work in Vermont.

In 1992 King Arthur initiated its Life Skills Bread Baking program, which taught 900 Connecticut school children to bake  bread and share it with the community. That program grew into Bake for Good Kids, which has now been running for 25 years, with more than 175 cooking classes held annually for 4th through 7th graders across the country. The goal of the program is to emphasize learning, baking, and sharing within the community. The curriculum is designed to highlight the importance of math, science, and reading alongside making bread from scratch. Each recipe yields two loaves of bread, one for each student to take home and one to give to a local charity.

The Cafe + Bakery on the flagship campus as well as the classrooms onsite donate leftover baked goods to local hunger relief efforts, and other food scraps go to local farms.

Whether it’s local charities like Upper Valley Haven, Hunger Free Vermont, and Willing Hands, or national organizations such as Feeding America and 1% For The Planet, King Arthur is dedicated to strengthening connections and access to food.

With its Essential Goodness Buy a Mix, Give a Mix program, the company donated more than one million meals in 2019 to people facing hunger across the United States.

One hundred percent owned by its more than 300 employees since 2004, the company is also committed to fostering a culture of wellness and healthy lifestyles among its employees. There are fitness facilities on-site and stipends for employees to use for wellness, and year-round employees are offered a subsidized Community Supported Agriculture program from a local farm, which allows consumers to receive boxes of fresh produce from local farmers. All full-time and part-time employees also receive 40 hours of paid volunteer time per year,

Within the company, King Arthur Flour has a reimbursement program to encourage employees to carpool, use public transportation, bike, or walk to work, thereby saving 72,000 driven miles per year. Additionally, on-site solar panels at the headquarters in Vermont have generated 13,000 kWh per year, energy used for electric-car charging stations on-site.

Production emphasizes sustainability as well. Seventy percent of King Arthur’s catalog pages are printed on 100 percent recycled paper and are Forest Stewardship Council (FSC) Certified, which is the “gold standard” for wood and paper products in being responsibly managed, socially beneficial, and environmentally conscious. One hundred percent of their flour bags are recyclable, and 100 percent of their boxes are made with 100 percent recycled board. On the administrative side, the company’s Green Team is continually working to reduce waste and energy and to “green up” daily employees’ habits at work by creating initiatives such as battery recycling and plastic bag recycling.

In the early years of America, Henry Wood began importing flour from England for Henry Wood & Company, the first food company in New England and the precursor of King Arthur Flour.  The opening of the Erie Canal in 1825 allowed Henry Wood & Company to stop importing wheat from England and to source its wheat exclusively from American farmers. By the end of the 1800s, what was by then the Sands, Taylor & Wood Company introduced its new and improved flour along with its new name, King Arthur Flour, named for its royal attributes of purity, honesty, “superior strength, and a dedication to a higher purpose.”

In 1968 it became New England’s largest bakery supply distributor, and, after almost 200 years with its headquarters in Boston, King Arthur Flour moved to Norwich, Vermont, where it experienced a quick expansion of its products and programs.

The King Arthur Flour Bakery and Baking Education Center, an on-site bakery and school on the Norwich, Vermont, campus, opened in 2000.

King Arthur Flour is constantly trying to improve. In the 2019 fiscal year, its goals included generating higher levels of performance and efficiency, building a stronger internal and external community, reducing its environmental footprint, and improving upon its sustainable sourcing.