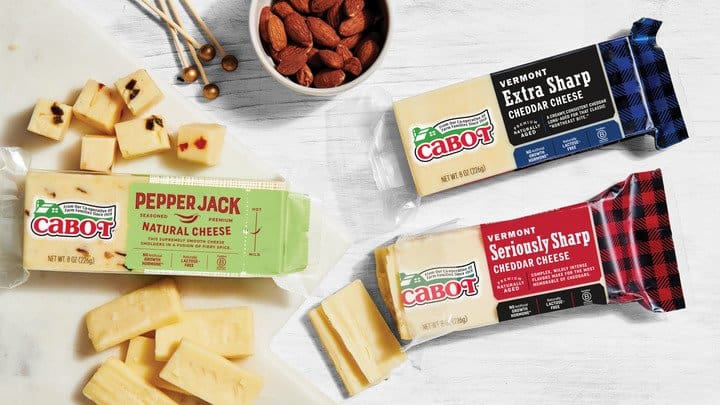 Part of an ongoing series about interesting, #sociallyresponsible food companies.

Cabot Creamery is a cooperative, meaning that it is owned and operated by its members, the family dairy owners who source Cabot’s products. The company is owned by 800 farm families across New York, Massachusetts, and Vermont, who manage four production plants. The cooperative provides fair-wage employment to more than 1,000 people, maintains the ecological integrity of its production landscapes, and creates award-winning cheeses.

The company prides itself on its commitment to returning 100 percent of its profits to the farm family owners and its continued focus on family farming. Cabot’s product line includes award-winning varieties of cheese, yogurt, sour cream, butter, milk powders, and, most notably its cheddar cheese.

As a cooperative, Cabot honors the Rochdale Cooperative Principles, which guide its operations as well as those of co-ops around the world. The principles focus on member equity, democratic governance, education and training, and local ownership, as well as cooperation and partnerships with other co-ops. Cabot’s partners over the years have included food co-ops, agricultural purchasing co-ops, and rural electric co-ops.

The cooperative programs that Cabot offers, including “Growing Health and Wealth” and “Wonder Wheel,”  focus on teaching children about fueling their bodies with healthy foods, making conscious and socially responsible choices, and supporting businesses. In addition, Cabot Creamery offers seven food systems-focused programs specifically for community youth groups that are available online to download at no cost. Many of the programs available online award ‘patches’ upon completion within different themes and topics.

The Pollinator Patch program teaches kids about the importance of pollinators as well as practical ways to help protect pollinator populations. Small Steps Towards Sustainability encourages youth groups to make small changes that cumulatively help to create a more sustainable community. The B Corp Patch program teaches children how to make a positive impact on their communities by supporting B Corporations, which are companies that meet specific standards of social and environmental responsibility as well as transparency embedded in its profits and purpose; and the Gratitude Patch encourages children to express gratitude for things and people in their lives. The Co-ops for Community Patch program teaches children about the value of cooperatives as a better business model and helps to inspire leadership skills. Fueling Head to Toe teaches children about healthy lifestyles with an emphasis on nutrition and physical activity, including hands-on activities and practical tips, and the Calcium Challenge Patch program focuses exclusively on the importance of calcium in a healthy diet.

Cabot Creamery values sustainability and aims to continue improving its environmentally-friendly practices. The company won the U.S. Dairy Sustainability Award given by the Innovation Center for U.S. Dairy, for its “triple bottom line of sustainability,” meaning its emphasis on good business, community, and the environment.

The company’s pledge of sustainability is summarized in its pledge of “living within our means and ensuring the means to live” and incorporates the values of human well-being and responsible use of natural resources. Many of Cabot’s farms, including Blue Spruce Farm, Liberty Hill Farm, Springvale Farm, and Foster Brothers Farm, are using a Sustainability Scorecard to help direct their efforts.

Cabot also makes an effort to conserve water resources. Fifty percent of the water used at the Cabot plant is upcycled from milk. This process was introduced in 2014 and requires fewer chemicals to clean the water, less energy to heat water for cleaning purposes, and uses 277,400 fewer gallons of municipal potable water per year.

Cabot Creamery was founded in 1919 in Cabot, Vermont. Since its formation more than a century ago, the company has been made up of a cooperative of farmers who come together as one of the nation’s biggest dairy providers. Initially made up of 94 farmers, the group purchased the village creamery and began to produce butter, and, over the next two decades, they started to ship their butter south.

In 1930, the number of cows in Vermont outnumbered the number of people by more than 50,000. By then, the company hired its first cheesemaker, and cheddar cheese was added to the product line. By 1960, Cabot’s membership reached 600 farm families, and the membership has continued to grow through the following decades.

In 1992, Cabot merged with the Agri-Mark Cooperative allowing it to expand, with a rebuilt plant for butter production in West Springfield, Mass, followed by the addition of a plant in Middlebury, Vermont for cheese and whey production. In 2003, Chateaugay Cooperative merged with Cabot and Agri-Mark, adding the McCadam brand Chateaugay plant in New York. Today, Cabot cheese can be found in specialty stores and major supermarkets in all 50 states.

Cabot’s trademarked process called Real Farm Power uses cow manure and food scraps electricity, heat, and fertilizer. The cows in the Cabot cooperative provide not only the cream but also the electricity needed to produce all of Cabot’s butter.

Real Farm Power repurposes 92,000 pounds of feedstock per day, and the generator from the process produces 285 kilowatts of electricity per hour at its highest level, which, over the course of a year, is enough power more than 250 homes.

Where to buy: Cabot products and recipes can be found in grocery stores across the country and online. Find a store near you with their online store locator.