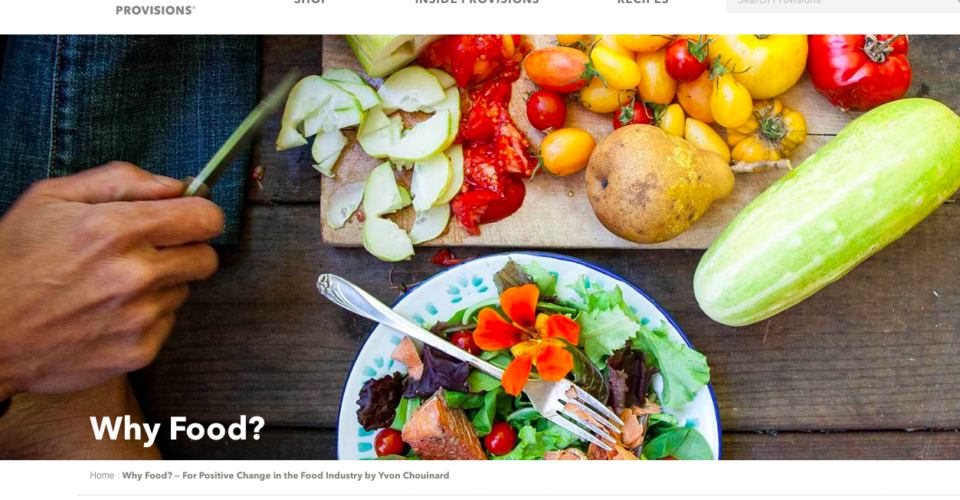 Part of an ongoing series about interesting, #sociallyresponsible food companies.

Patagonia is a clothing brand with a strong mission “to save our home planet.” The company believes that what we eat does more than fuel our bodies and fill our stomachs. Food can lift our spirits and help connect us to the world. This ethos inspired the creation of Patagonia Provisions as a way to share some of Patagonia’s favorite foods with customers, create positive change in the food industry, and inspire environmental solutions.

Yvon Chouinard, the founder of Patagonia, says that Patagonia Provisions is “adopting the best practices already in existence” and also “finding new ways of doing things, which as we might have guessed, frequently end up being the old ways.” Headquartered in Sausalito, California, it debuted in 2012 with just one product–wild sockeye salmon jerky. Since then, Patagonia Provisions has continued to challenge standard practices in food sourcing, remain committed to regenerative organic growing methods, and work with like-minded advocates to find solutions to environmental issues.

The company now offers a growing selection of foods including a variety of dry goods, grains, seafood, snacks, beer, and gift boxes, all of which are available to order online. The selection is made up of foods that Patagonia vows are committed to flavor, nutrition, and regenerating – rather than depleting – the environment. The jerky is made from free-range, grass-fed American bison, the salmon is sourced with guidance from the Wild Fish Conservancy, and the beer is made from a perennial grain called Kernza, whose long roots allow for its survival without tilling or pesticides and requires less water than conventional wheat.

Like all of Patagonia’s goods, its food products aim to reach the company’s environmental standards. Since 1985 the company as a whole has been donating one percent of its annual net revenue to non-profit charitable organizations that support environmental conservation and sustainability. As of this date, that sum exceeds $104 million.

Patagonia Provisions became a Certified B Corporation in 2012 and has been honored as Best for Changemaker, Best for Community, Best for Environment, and Best for Overall in 2019. Highlights from its Annual Benefit  Corporation Report note that this past year, Patagonia Provisions expanded its product line to include yearling mussels that are harvested from Spain’s Galician coast and grown in adherence to the European Union’s organic aquaculture standards. The company considers this a notable addition because sourcing mussels from its native space means avoiding the introduction of an invasive species to an unnatural habitat, and because the coast is one of the first places to implement an organic certification for mussel aquaculture.

In support of its belief that activism is a means of finding solutions to the environmental crisis, last year the company launched Patagonia Action Works, a digital platform that connects consumers and the community to environmental groups, thus offering both resources and opportunities to get involved.

In 2016, Patagonia Provisions produced a film called Unbroken Ground, which explains the crucial role food plays and will continue to play in our efforts to resolve the environmental crisis. After exposing  America’s current agricultural practices, which reduce biodiversity and contribute to climate change, the film goes on to explore more sustainable ways to grow, harvest, and generally produce our food, highlighting the stories of pioneers in the fields of regenerative agriculture and grazing, diversified crop development, and restorative fishing.

And in a continuing effort to achieve greater transparency, Patagonia started The Footprint Chronicles in 2007, an interactive map that gives information about the factories and what products they make for the company in order to show each step in the supply chain for all of its products, and maintains a Reference Library that encapsulates the company’s sustainability principles, environmental assessments of materials, and the measurement and improvement standards for its environmental performance.

Patagonia Provisions was created as a division of Patagonia Works in 2012  to broaden the company’s environmental mission and support forward-thinking farmers, ranchers, and other food producers by offering a variety of organic foods.

According to Patagonia’s 2018 Environmental and Social Initiatives Report, Patagonia Provisions was started to “generate market pull for ingredients that are farmed with the future in mind.” After employees at the Boston store complained of headaches when shipments arrived, the clothing company investigated further and found that their cotton products were causing formaldehyde off-gassing. This started Patagonia’s switch towards using organic cotton for its products, which inspired industry-wide change. With it came the inspiration for Patagonia to enter the food industry.

According to a press release from the time of Patagonia Provisions’ launch, the company aimed to tackle the problem created by commercially farmed salmon by advocating for the consumption of sustainable wild salmon and protecting the future of the fish.

Patagonia entered “uncharted waters” to achieve its mission  The company has since discontinued its original salmon jerky but has continued to focus on building the best products and doing good. Birgit Cameron, managing director of Patagonia Provisions, told Edible Manhattan that “food-related agriculture is one of the big contributors to climate change, so we felt like we couldn’t stay away from that piece of it.”

Along with other leaders in the organic industry, and as part of the Regenerative Organic Alliance, Patagonia has developed a Regenerative Organic Certification, which is available to any product made with agricultural ingredients that adheres to specific criteria including holistic animal welfare, justice for farmers and workers, and extensive requirements for soil health and land management.

Healthy soil standards include rotational grazing, conservation tillage, crop rotations, and no GMOs or soilless systems. Animal welfare focuses on Five Freedoms: freedom from discomfort, from fear and distress, from hunger, from pain, injury or disease, and freedom to express normal behavior. The certification also includes a social justice requirement based on good working conditions, fair payment for farmers, transparency and accountability, living wages, and long-term commitments to workers.

The goal is to make it clear to companies that in order to have an impact, advancements must be made in sustainability operations, economic justice, animal welfare, and fair labor all at once.

Patagonia’s goal is to eliminate or mitigate all carbon emissions by 2025. The actionable steps that the company is making towards that goal include a system in place to measure current impacts, improving energy efficiency and avoiding the need for energy where possible, converting to renewable energy, and investing in ways to remove warming gases from the atmosphere. To achieve this last step, the Regenerative Organic Certification focuses on capturing working towards regenerative organic agriculture in order to minimize carbon emissions.

Where to buy: Patagonia Provisions products and recipes can be found online and in Patagonia clothing stores and other like-minded shops across the country. Find a store near you with the online store locator.