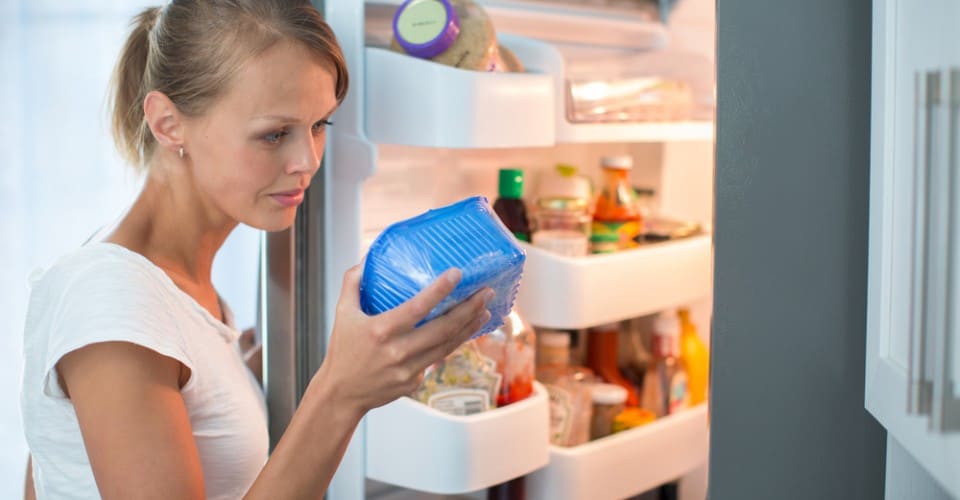 Test your knowledge and see if you can still eat it.

True or false: Foods can last forever in the #freezer.
True. Going into my mother’s freezer is like taking a trip down memory lane. She has a piece of my sister’s wedding cake that’s just celebrated its 18th anniversary. But even though frozen foods are safe forever, the activity of enzymes in animal foods, vegetables and fruits can deteriorate their quality. Freezing slows, but does not stop, the enzyme activity.

That’s why food in the freezer has a “quality” shelf life, which varies depending on the food. For instance, hamburger has a freezer shelf life of three to four months. And any food that you freeze needs to be wrapped in heavy-duty aluminum foil, plastic wrap or an airtight freezer bag. Here are a few examples of foods you might typically freeze and their recommended storage durations:

True or false: A doggie bag from my favorite restaurant will last at least a week if the fridge is cold enough.
False. Takeout food, doggie bags and leftovers should be put in the fridge within about two hours and eaten within two to three days, according to Donald W. Schaffner, Ph.D., extension specialist in food science and professor at Rutgers, The State University of New Jersey. Many times the quality, including taste and texture, breaks down, says Meredith H. Luce, M.S., R.D., a clinical dietitian at Florida Hospital in Orlando. She advises keeping leftovers in airtight containers, not in aluminum foil — it just doesn’t do the job. “Air is your enemy in preserving the taste and quality of food,” she adds.

Oh, and by the way, don’t think that simply looking at or smelling a food can tell you if it’s unsafe. Yes, it gives you clues as to its taste, but not its safety, says Schaffner. If you’re not sure when you stuck it in the fridge, toss it.

True or false: Using the salad and/or meat drawer in the fridge preserves your food for months.
False. Although I thought those drawers were a scam to help sell refrigerators, they actually do help extend the life of your food — just not for months. “The salad and meat drawers provide air circulation and minimize drying, so they do increase shelf life and maintain the texture and appearance of the foods,” says Purnendu C. Vasavada, Ph.D., a professor of food science and microbiology at the University of Wisconsin-River Falls. The key feature of a meat drawer is its temperature. Some newer refrigerators have meat drawers with separate temperature controls. “The colder you can keep your meat, the longer it will last,” says Schaffner.

And, according to Schaffner, “The two key features of a vegetable crisper are control of humidity and temperature. That’s why supermarkets mist vegetables with water, because they tend to lose moisture over time!”

If you store vegetables and meat properly, you could see as much as a 40 percent increase in their shelf life. But if you tend to put them in the drawer and not use them — out of sight, out of mind — well, that defeats the entire purpose, adds Luce. However, from a food-safety perspective, even limp or discolored vegetables, such as lettuce, are perfectly safe to eat, says Keith R. Schneider, Ph.D., a professor of food science at the University of Florida in Gainesville.

True or false: If cheese gets moldy, it’s safe to take the mold off and eat the cheese.
True, but it really depends on the kind of cheese. If mold forms on hard or firm cheese (e.g., Cheddar, Parmesan), cut off the mold plus 1 inch of cheese around and below the mold. Be careful not to touch the mold with your knife. Then wrap the trimmed cheese in plastic wrap and #refrigerate it, advises Luce, who also says that soft and semisoft cheeses like brie, feta or cottage cheese are a different story. Mold spores spread more easily through soft foods, so if you see mold on a soft cheese (unless it’s supposed to be there, as with blue cheese), throw it out. The poisons that molds can form are found under the surface of the food. So, while you can sometimes save hard cheese, salamis and hard fruits and vegetables by cutting the mold out and removing a large area around it, most moldy food should be discarded, including breads, jams, jellies, yogurts and sour cream. According to Schneider, you should refrigerate cheese sealed in its original package until you are ready to use it to prevent mold growth.

True or false: Condiments like mayonnaise, ketchup, mustard and barbecue sauce can last a long time in the fridge — almost forever.
True, but not forever. They’ll last about six months, which to most of us sounds like a pretty short time considering our condiments seem to be in there for years. They will eventually spoil, either due to chemical changes or bacterial growth. But keep in mind that these bacteria are not the ones that make us sick; they just spoil the taste, says Schaffner. “One of the reasons condiments last as long as they do is because they have an acidic environment (e.g., the vinegar in ketchup), and bacteria don’t do well in that situation,” says Schneider. As far as mayo is concerned, Dr. Schneider says it gets a bad rap and is not really as dangerous as its reputation. He also reminds us that foods that are rancid are not necessarily dangerous — they just taste bad.