Interview with Danielle Nierenberg, President and Co-Founder of Food Tank 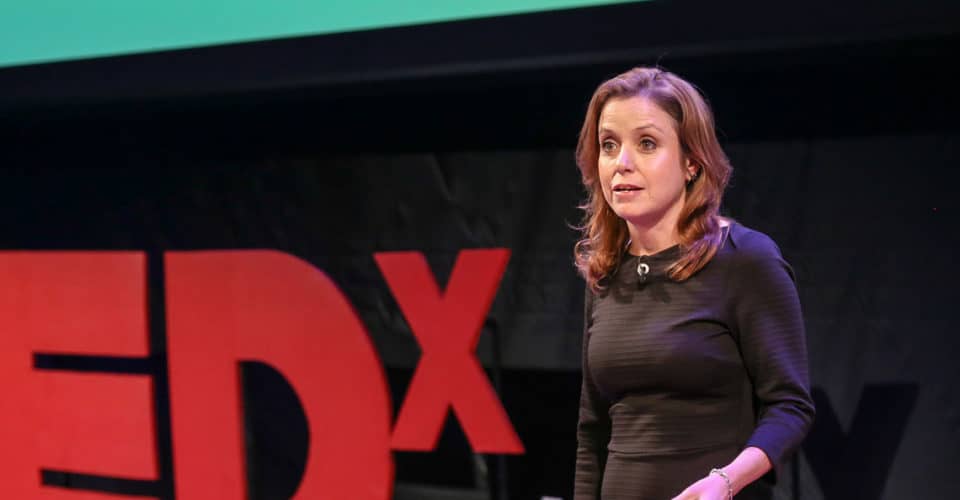 In 2013, Danielle Nierenberg co-founded Food Tank, a nonprofit organization focused on building a global community for safe, healthy, nourished eaters. Food Tank is an international convener that aims to educate, inspire, advocate and create change in the food system.

She has traveled to more than 70 countries across sub-Saharan Africa, Asia, Eastern Europe, and Latin America, conducting extensive on-the-ground research into all aspects of the food chain. Danielle has interviewed farmers, scientists and researchers, policymakers and government leaders, students, academics, and journalists, to document solutions that can alleviate hunger and poverty while also protecting the environment.

Her knowledge of global food system issues has been cited widely in more than 20,000 major print and broadcast outlets worldwide, including The New York Times, The Wall Street Journal, The Washington Post, the BBC and hundreds more.

Danielle speaks at more than 100 events per year, all over the world. These include SXSW, TED, the James Beard Foundation Leadership Awards, the Barilla Center for Food & Nutrition’s International Forum on Food and Nutrition, and many others.

Danielle was born and raised in Defiance, Missouri. She has an MS in Agriculture, Food, and Environment from the Tufts University Friedman School of Nutrition Science and Policy and a BA in environmental policy from Monmouth College, Illinois. She also spent two years in the Peace Corps working with farmers and urban school children in the Dominican Republic.

Dani, thanks for the opportunity to interview you. I would love to know how you became interested in becoming a food advocate. Was it an early passion? We know you grew up in Missouri; did your upbringing influence your love for food and farming? We also read about your interest in food after reading Frances Moore Lappé’s Diet for a Small Planet; was that the trigger that ignited your interest in food?

Danielle Nierenberg: I grew up in a small town, Defiance, Missouri, and I grew up around farmers. But I was always an environmentalist and an avid lover of animals. I became a vegetarian when I was thirteen and read Frances Moore Lappe’s book, and that kind of changed my whole life. I knew I wanted to do something that would help people be more aware of the effect their food choices had on the environment. Unfortunately, I misunderstood what the farmers growing corn and raising livestock did in Defiance and all over the Midwest. When I went to the Dominican Republic with the Peace Corps, I finally realized the connection among food, farming, nutrition and the environment.

What is your overall food philosophy?

Danielle Nierenberg: Big question! I think it’s less about having a food philosophy and more about trying to highlight the importance of people in the food system–from farmers to eaters and from scientists to economists–and realizing that we need to make the connections among them all and work to break down the silos that keep them from working together.

We know you get this question often, but we have to ask. How and why did you create Food Tank? What are some of the key reasons or elements that helped Food Tank (foodtank.com) become so impactful? What do you think is its biggest accomplishment? Where do you see Food Tank in five years?

Danielle Nierenberg: My co-founder, Bernard Pollack, and I spent a lot of time at an environmental organization. I kind of grew up there, right after grad school, and it was the place I always wanted to work. However, they were kind of gloom and doom and focused more on the problems than the solutions. But Bernie and I were seeing solutions on the ground all over the world that just needed a little more attention, a little more research, a little more funding to be scaled out and up in different ways. We wanted to highlight what was working and build a platform for those innovations, ideas and stories of hope to get to a wider audience.

You’ve traveled all over the world, so what do you think we Americans are missing most in our food system?

Danielle Nierenberg: Connection. Connection to the land, the people who work it, the labor that goes into making it, the resources and diversity that are required to create a healthy food system, and one another.

In your opinion, what is the number-one thing most governments get wrong about agriculture, nutrition and food?

Danielle Nierenberg: The understanding that farmers are not only food producers but businesswomen and businessmen who deserve respect and economic security, and who, as stewards of the land, deserve to be compensated for the ecosystem services they provide. Governments also have a tendency to put agriculture, nutrition and food in separate silos–along with health. Given our current political situation globally and the need for more coordinated action to prevent not only problems like COVID-19 but also diet-related diseases, we have to encourage governments to break down those silos.

At a Food Tank Live Event in New York City last year you spoke about equity in the food system. Why do we need to keep talking about equity? What roles do race and gender play in our food system?

Danielle Nierenberg: We haven’t talked enough about equity–we ignore racism in the food system, and we’re doing it at our own peril. This is a complex question, and I think that communities of color can answer it better than I can. What Food Tank hopes to do is really create the space and the platform to have conversations that are uncomfortable but needed. They are needed because we can’t continue ignoring not only racism but also classism, sexism, and all of the other issues that separate us rather than bringing us together.

Clearly, poverty is a major driver of hunger; however, since we’re not solving poverty right now or likely anytime soon, what can we do in the meantime to alleviate hunger? Does taking these “interim” steps just obfuscate the overriding issue of poverty? What are some of the most promising strategies you’ve seen for reducing hunger and fixing our food system? And what can people reading this do right here right now to help?

Danielle Nierenberg: These problems are inextricably linked. We can’t solve one without the other. We need farmers, food workers, food service workers, and others who work in food and agriculture to have living wages that allow them to be well nourished and healthy so that they can keep producing, slaughtering, harvesting, processing, distributing, cooking, and serving the food we all eat. What can all of us as eaters do? Vote with your fork and vote with your vote. Get involved in your local and state elections where some of the most important decisions are being made on nutrition schools, procurement, and other important issues that will impact how we produce and eat food.

You’ve talked about how important it is to have uncomfortable conversations and to get people who don’t agree with each other into  the room together. Why is this important to you and what do you think has come from these efforts? Can you share a particularly engaging conversation between individuals who had opposing views of what our food system should look like?

Danielle Nierenberg: People are so scared of blunt dialogue and honest debate that we never talk to anyone who disagrees with us. That has to change. We need to embrace being uncomfortable and having discussions–with civility–with those outside of our own choirs. Preaching to the already converted won’t change anything. We need to embrace the gray, instead of the black and white, and understand that these issues are nuanced and that there is rarely one solution. I’ve sat at a couple of dinners with policymakers from different sides of the aisle who see each other every day but have never spoken and certainly never shared a meal. Watching them talk about their families or share how their spouses like to garden or compost is a small step in getting to one another on a human level and understanding that one of the things we all have in common is food.

Was there a defining moment when you made a decision that changed the course of the rest of your life?

Danielle Nierenberg: When I was in the Peace Corps in the Dominican Republic, riding around on the backs of motorcycles and meeting farmers and working with school kids, I really understood the power of agriculture and food, and it made me want to do the work that I get to do every day. I’m forever grateful to those farmers and the hundreds and hundreds of farmers I’ve met all over the world. They changed me, and they made me want to share their stories.

Grew up in: Defiance, Missouri

One word you would use to describe our food system: Complex

Food policy social media must follow: Too difficult! Food Tank follows so many great individuals and orgs and my favs and go-tos change from week to week.

As a child you wanted to be: Exactly what I’m doing now.

Your proudest “food” moment: Working every day to try to be a small part of this growing food movement.