How Do Animals Eat? Part 1 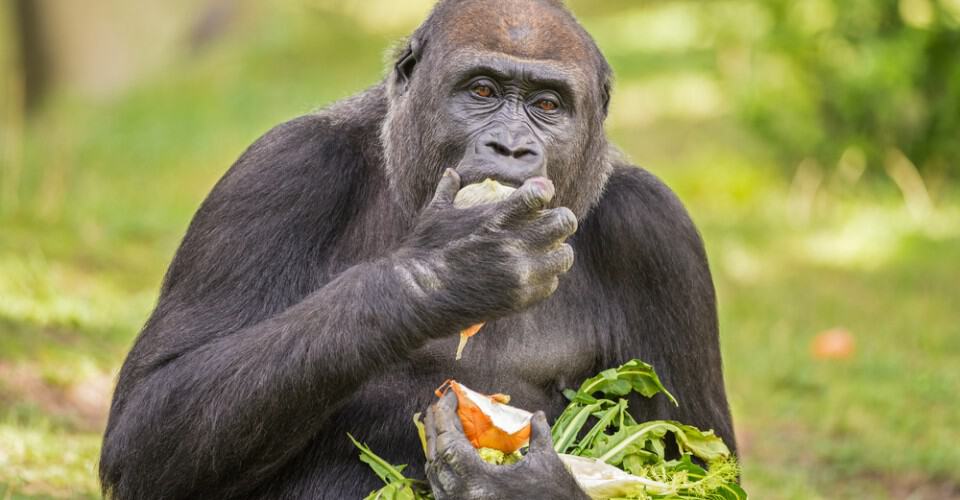 I thought it would be interesting to find out more about the way #animals eat, so I reached out to #Bruce Rengers, Ph.D., R.D., a professor at Metropolitan State College of Denver and a former zoo employee, and #Jennifer Watts, a nutritionist at the Brookfield Zoo in Chicago. Here’s what I learned:

What are common weight-gain issues that animals share with humans?

Bruce Rengers: Some, but certainly not all ­ animals, when they are sedentary and have easy access to food, such as in a zoo, definitely do become obese. The best example I have seen is orangutans. In the wild they are arboreal animals that move over large distances. It is hard to replicate that lifestyle in a zoo, so orangutans become obese and sometimes develop Type II diabetes. I did not observe this with gorillas, however, even though the zoo gorillas lived in exactly the same type of environment and had the same food. There were other animals that were obese or overweight in the zoo, and we spent time making special diets to help them lose weight.

There is a concern in zoos about what animals eat. People always want to feed zoo animals or pets the kinds of “seductive” foods we eat as humans. Feeding animals highly refined, sugary, fatty human foods (or natural foods that are high in fat) can cause them to start rejecting their normal foods. There is, for example, concern about giving birds nuts and seeds that are very high in fat because they will then start rejecting their normal seeds and other foods that are not so high in fat.

How often do animals eat? I’m sure all animals are different, but is there an overall theme or pattern?

Jennifer Watts: Most animals are fed twice a day. Animals with faster metabolisms (passerine birds, for example) must have food throughout the day, while animals with slower metabolisms (snakes, alligators, etc.) eat only once or twice per week, or even every other week. Ruminants (camels, giraffes, bison, cattle, etc.) cannot be offered one grain meal per day; it must be spread out to two or three meals to avoid rumen acidosis. They must also have access to hay or grass most of the day to maintain rumen health. For most carnivores we institute a “fasting day” or “bone day” when they don’t get their normal amount of food. This strategy replicates the way the animals would eat naturally. Most zoos, however, cannot duplicate true natural feeding ­ i.e., feeding a lion 30 pounds of meat then letting it fast for five to six days , because this would not provide consistent behavior from the animal for training and evacuating. We need most animals to evacuate reliably so that keepers can clean the exhibit, remove the animal from the exhibit to do a physical/visual check and examine the exhibit. Any animal that needs to move from its exhibit area to a behind-the-scenes holding area usually has the “good stuff” saved for its evening meal, because if the animal knows that it’s going to get something good afterwards, it will be more compliant about moving inside.

How much do animals eat?

Jennifer Watts: For larger animals, it ranges between 2 and 5 percent of body weight but can increase to upwards of 25 percent in smaller animals with fast metabolisms. For example, poison dart frogs need to have fruit flies and inch crickets available at most times, while larger frogs and toads get full-size crickets every other day. Our Andean condors get a rat or rabbit three times a week. Humboldt penguins, which weigh 7 to 8 pounds, get fed about ¾ to 1 pound of fish daily (supplemented with vitamin E and thiamin). Dwarf mongooses get 6 grams of dry dog food, 6 grams of wet cat food and about 3 grams of mealworms and/or crickets daily. They also get a mouse, fish, or rib bone once a week. The lions and tigers (which weigh anywhere from 350 to 550 pounds) get fed about 4 to 8 pounds of commercial supplemented meat product six days a week; marine mammals weighing 300 to 450 pounds are offered between 10 and 15 pounds of fish daily; and the grizzly bears (700 to 900 pounds) are offered between 7 and 40 pounds of food, depending on the time of year. Animals with hoofs eat the majority of their diet as hay, but again, size is a huge factor. Small duikers (African forest deer) weigh about 4 pounds compared with bison or giraffes that are both around 1,400 pounds.

Do animals eat for no reason? Out of boredom?

Jennifer Watts: In the wild, no, but boredom is rarely an issue in the wild. Besides all of the non-diet reasons animals move and forage, food items come into season at different times and can be difficult to procure and/or open. In captivity, the presentation of the diet makes it easy to eat, and foraging time is greatly reduced. To introduce variety, we try to offer diet items that are not peeled or husked so that the animals need to work for the food, and the animals seem to enjoy it. Watching gorillas and orangutans cracking coconuts is very entertaining because they do it with such fervor and determination!

Many animals will eat what is placed in front of them to the point of obesity because they have evolved to eat opportunistically whenever food presents itself. Some non-mammalian species, such as carnivorous birds and herbivorous reptiles, seem to have much more ability to self-regulate caloric intake, but it also depends on the species and the individual. There are small felids (various types of carnivorous cats) at our zoo that will turn their noses up at food at a certain point while a certain large tortoise species will just eat and eat and eat. In my position, it’s difficult to say whether an animal would continue to eat if given unlimited food; I don’t let that happen! Boredom usually manifests itself in undesirable behaviors or social stress, so we use diet items spread out over the day to alleviate that stress, but the items offered are always within the animal’s daily caloric allotment.