Diet Detective’s How Bad Can One Be? 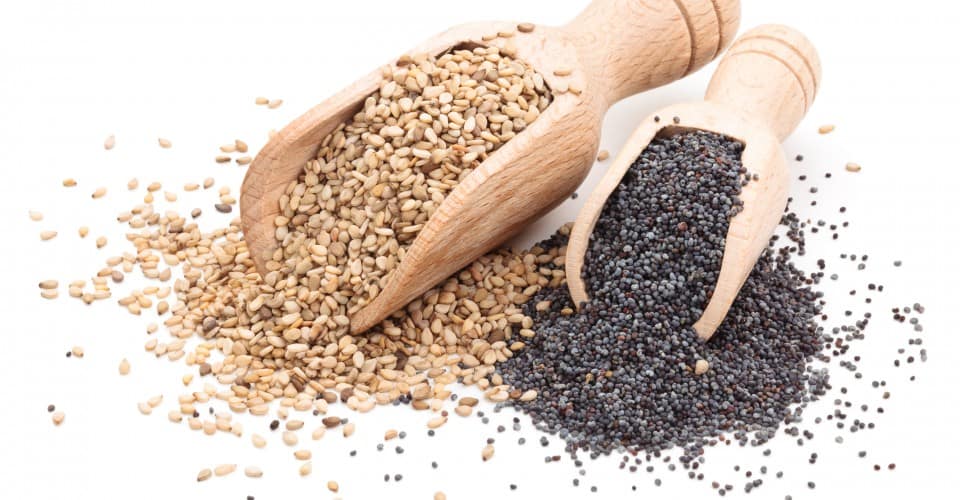 #Diet Detective’s How Bad Can One Be?

1 Tablespoon of Sesame Seeds vs. 1 Tablespoon Poppy Seeds
I’ve been eating sesame seeds every day for the past six months. Wow, they’re high in #calories! In fact, there are 52 calories in every tablespoon. However, the good news is that sesame seeds are high in calcium (87.8 milligrams), with approximately 9 percent of the recommended Daily Value for a 2,000-calorie daily diet. They’re also surprisingly high in much-needed iron, with 1.3 mg, which is 7 percent of the Daily Value (compare that to 3 ounces of cooked top sirloin, which has 2 mg of iron and 156 calories). Sesame seeds also contain minerals such as copper, manganese, phosphorus and thiamin. And a tablespoon even has 1 gram of fiber.

One tablespoon of poppy seeds also contains 2 grams of fiber and 2 grams of protein.

1 Sun Chip vs. 1 Popchip
Sun Chips are no calorie bargain at 8.75 calories per chip, and, believe it or not, even though they’re made with whole grains they also have added sugar, which regular chips do not. However, Sun Chips do have 3 grams of fiber per ounce (about 16 chips), as compared to 14.5 calories per chip and 1 gram of fiber per ounce (about 15 chips) for regular chips.

The Sun Chips manufacturer used smart marketing concepts, and, as a result, these chips have a real #health halo. People think Sun Chips are the healthy choice. In reality, however, they’re a decent alternative, but they’re still chips. How did Sun Chips, a division of Frito-Lay (owned by Pepsi) create this health halo? For one thing, the chips are made with whole corn, whole wheat and whole oat flour, so they’re not potato chips. And also the company was one of the first to create a biodegradable chip bag. According to The Wall Street Journal (and the company), however, five of the six Sun Chip flavors now come in packaging that’s not biodegradable. Why? Apparently the biodegradable bags were too noisy.

The other company that is doing a good job offering an alternative chip is
Popchip. Each chip is only 5.25 calories, and they have 1 gram of fiber per ounce (about 22 chips). Also, they do not contain any saturated fat. But again, if you eat an entire bag you’re still up there in terms of calories. A regular small bag has 100 calories, and the larger, 3-ounce “share” bags have 360 calories total. Yes, this is a better alternative if you are a regular chip eater and are trying to reduce. But keep in mind that we often end up eating more of foods we think are healthier, which of course defeats the purpose.

Gum Ball vs. Macadamia Nut
Clearly the gum ball is not the “healthier” choice. Macadamia nuts have about 20 calories per nut, and, believe it or not, a Dubble Bubble Gum Ball also has 20 calories.
Macadamia nuts have the most calories of almost any nut, so they’re probably not your best nut choice. But they do have a large amount of vitamin B – thiamin. In addition, macadamia nuts have heart-healthy monounsaturated fat and a decent amount of antioxidants (but not as many as walnuts, which, according to researcher Joe Vinson, Ph.D., a professor at the University of Scranton, is the top health nut).

Tic Tac vs. Life Saver
Tic Tacs used to advertise that they had only 1.5 calories each, but they’re a bit larger now and roughly 1.9 calories each.

As for Life Savers, I was surprised to learn that each one has 11.25 calories. They also contain high fructose corn syrup and food dyes, including Red 40, Yellow 5 and Blue 1. Here is the “411” on those dyes, according to the Center for Science in the Public Interest’s (CSPI) Chemical Cuisine ( www.cspinet.org/reports/chemcuisine.htm):

·     Red 40: “The most widely used food dye. While this is one of the most-tested food dyes, the key mouse tests were flawed and inconclusive. An FDA review committee acknowledged problems, but said evidence of harm was not ‘consistent’ or ‘substantial.’ Red 40 can cause allergy-like reactions.”

The problem with all three of these (and a lot of deli meats) is that they contain sodium nitrite. Nitrites are added to meat to stop it from going bad, stabilize flavor and give it a red color – they “cure” the meat. According to CSPI Chemical Cuisine, “Several studies have linked consumption of cured meat and nitrite by children, pregnant women and adults with various types of cancer. Although those studies have not yet proven that eating nitrite in bacon, sausage and ham causes cancer in humans, pregnant women would be prudent to avoid those products.”