Chefs Who Cook Well and Do Good: Tom Colicchio 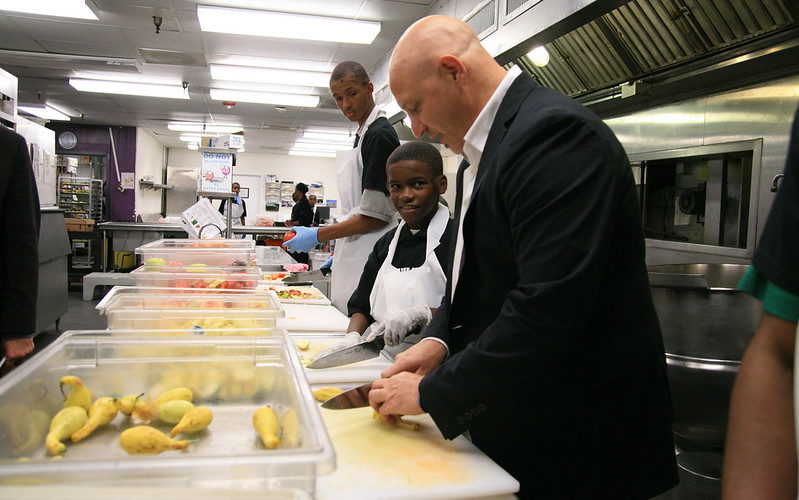 Culinary Training: While Tom Colicchio intended to go to culinary school, life had other plans. He began his culinary career in 1980, working as a busboy and prep cook at Evelyn’s Seafood in Elizabeth, New Jersey i. By 1985 he was working as a line cook and later sous chef at a four-star restaurant called The Quilted Giraffe in New York City. “I was still planning on culinary school, but once I was promoted from line cook to sous chef, that was it,” he said in an interview with Bloomberg.

Best Known For: His role as the head judge on every season of Bravo’s Top Chef; his political activism related to food issues

How He Is Changing the Food System: Colicchio has a long-standing reputation as a chef and political activist. He currently serves on the Food Council at City Harvest, New York City’s oldest food- rescue program, and on the Culinary Council at Food Bank for New York City which is comprised of more than 50 top chefs, restaurateurs, authors and other culinary leaders who have committed themselves to ending food poverty in New York City. He is also a board member of Wholesome Wave, a nonprofit organization that empowers under-served consumers to make better food choices by increasing affordable access to healthy produce.

Colicchio also remains committed to food issues beyond his work with hunger-relief organizations. As part of his effort to broaden his activism,  he produced and appeared in the 2013 documentary film, A Place at the Table in which fellow food activists including Jeff Bridges and Raj Patel also appeared. The documentary exposes the underlying causes of hunger in the United States and highlights the responsibilities members of Congress have for creating a more just and sustainable food system.

His efforts to hold politicians accountable do not stop at the box office. He frequently takes to his widely followed Twitter feed to promote Food Policy Action’s legislative scorecard initiative, which rates members of Congress based on their voting history relating to food-policy issues.

In an interview with Disruption Magazine, he explained that “People aren’t hungry because there’s a scarcity of food. They’re hungry because we don’t have the political will or policies to make sure everyone gets fed.”

In addition to taking to Capitol Hill to speak with Congress directly, Colicchio encourages all those listening to him to take it upon themselves to get out and vote. “I made a bet that people who care about food would also care about hunger,” Colicchio said,. “And [I] have dedicated my life, my face and my time to educating those people on how to vote around food — to forging a constituency of food voters who value these issues the same way people value reproductive rights or the Second Amendment.”

It is no surprise that the New York Times dubbed Colicchio the “Citizen Chef” for advocating for a food system that values access, affordability and nutrition over corporate interests.

In November he will be speaking at the 2019 Food Tank Summit, held in New York City in collaboration with the New York University-Steinhardt Center and the Hunter College NYC Food Policy Center. The event brings together 80 speakers and performers including CEOs, disruptors, changemakers, activists, policymakers, and leaders of startups, media organizations, large companies, and nonprofits who are leading the shift in how food businesses look at sustainability.

Awards and Honors: Colicchio is the recipient of numerous James Beard Foundation Awards for his accomplishments in the kitchen and on television. Here are a few of those accolades: