Chefs Who Cook Well and Do Good: Sam Kass 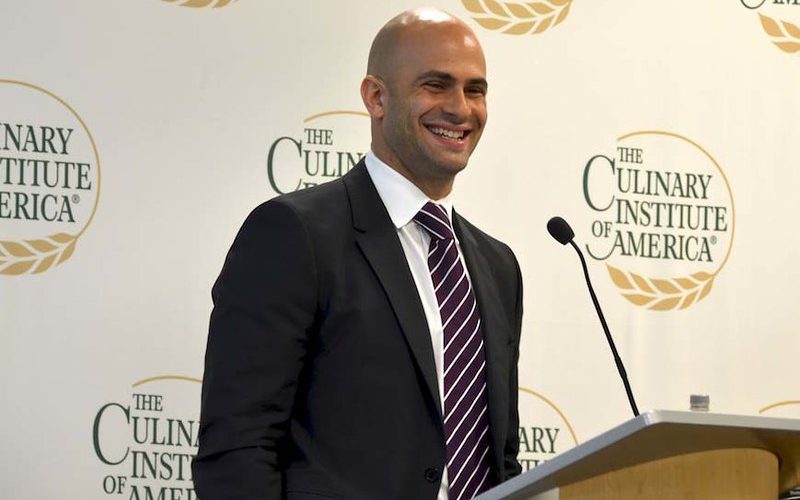 Culinary Training: Chef Sam Kass began his culinary training when he was enrolled in college. During his junior year of college, he worked at 312 Chicago under chef Dean Zanella. Then, during his senior year in 2003, he went to Vienna, Austria, to continue his training under chef Christian Domschitz. From there he traveled around the world to New Zealand, Italy, Mexico, among other places, before returning to Chicago in 2006 to work at the restaurant Avec under Executive Chef Paul Kahan.

Best Known For: Serving as President Barack Obama’s Senior Advisor for Nutrition Policy, as Executive Director of First Lady Michelle Obama’s Let’s Move! campaign, and as an Assistant Chef in the White House.

How He Is Changing the Food System: Chef Sam Kass is on a mission to help Americans eat better.  Based on his experiences during the Obama administration, his  expertise sits at the intersection of culinary creations and policy advocacy.

As executive director of Let’s Move! Chef Kass worked with Mrs. Obama to create a vegetable garden that is free of herbicides, pesticides and cemic al fertilizers, and the first major vegetable garden at the White House since Eleanor Roosevelt’s victory garden.

He left the White House in December 2014 to continue working toward creating a more sustainable food system through other endeavors.

“Sam has been an integral part of Let’s Move! from its very beginning — from discussions about children’s health around my kitchen table in Chicago, to setting the strategic vision of a national campaign in the White House, to spearheading efforts with the private sector across the country,” said First Lady Michelle Obama. “Sam leaves an extraordinary legacy of progress, including healthier food options in grocery store aisles, more nutritious school lunches, and new efforts that have improved how healthy food is marketed to our kids.  I wish Sam success in all his future endeavors, and I know he will continue to be a leader in the vitally important work to build a healthier country.”

In 2016 Chef Kass founded TROVE, an investment and communications consultancy that works with “corporations both big and small who are serious about transforming our health, climate, and planet through food.” sSo far the company has partnered with organizations including  Acre, The Honest Co., Thrive Market, Pure Tech, and more.

Chef Kass has devoted his career to motivating families and children to make smarter food choices. In an interview with TIME magazine, he outlined some of the simplest changes American families can make in their diets.

He believes that while implementing change may be difficult, it is not impossible.

“Sometimes it feels overwhelming. It feels like these problems are just so big, but in the end, the solutions can be quite small, approachable and doable. I think it’s important to remember that. We need to break through and make sure parents have that kind of information they need and we can deliver it to them in ways that are useful.”

In 2018 Chef Kass published his first cookbook, Eat a Little Better: Great Flavors, Good Health, Better World, which includes 90 simple recipes and provides  ways to think about shopping, kitchen-set up, and meal-planning that can make dieting and eating healthy easier.