Chefs Who Cook Well and Do Good: Alejandra Schrader 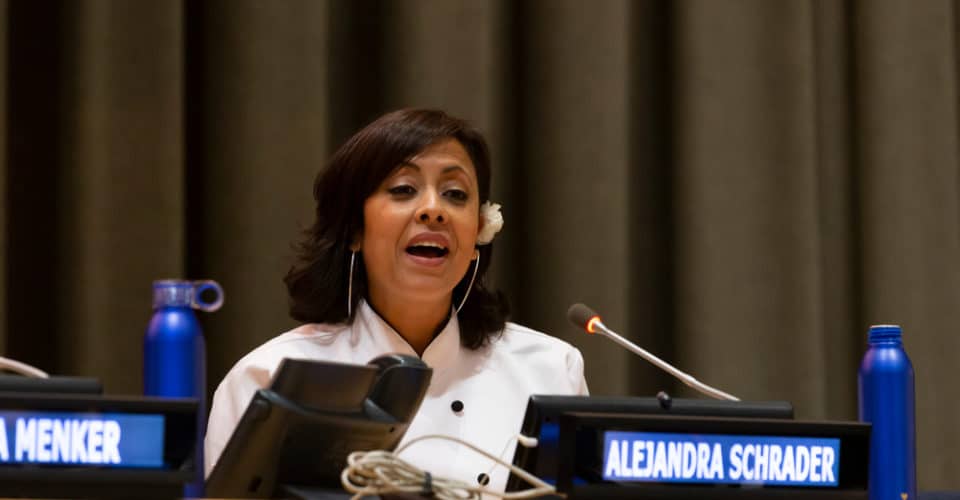 Hometown: Chicago, Illlanois, but grew up in Caracas, Venezuela

Culinary Training: Although Schrader grew up learning how to cook for her large extended family in Venezuela, her formal education is in urban planning and architecture. She received a Bachelor’s degree in architecture from the Southern California Institute of Architecture as well as a Master’s degree in Urban Planning from the University of Michigan, Ann Arbor. After losing her job in the 2008 recession and receiving the encouragement of her husband and friends, she decided to switch careers and follow her passion for the culinary arts.

Best Known For: Being a contestant on Season 2 of FOX’s reality show, Master Chef

How She Is Changing the Food System: Schrader may be best known as a private chef in Los Angeles and most recognized for her media appearances on The Talk, Access Hollywood Live, ABC News, and Cafe CNN; however, behind the scenes she is a dedicated food policy advocate. “I care about our actions and how they impact Mother Earth,” Schrader said. “Because of that interest, I’m always going into a conversation thinking about what can we do to change the way we eat, what we buy, and how we buy to benefit the world we live in.”

Her background in urban planning and her interest in sustainability push her to use wholesome, organic food products that are grown in accordance with environmentally-friendly farming practices. And she encourages those who look to her for recipes to do the same. Yet it is not just the environment but also our own bodies she believes should be protected.

“I was just at the United Nations talking about food as the planet’s medicine. I think when they brought up that topic they meant for sustainability and the environment, but I brought an extra perspective. It’s also a medicine for our bodies. Ultimately, I’m trying to walk the walk and talk the talk, encouraging people to eat healthier and cook at home,” Schrader said after her visit to the United Nations in 2019.

In addition to the United Nations, Schrader has also taken the stage at the World Bank in Washington, D.C., for an event that gathered a wide range of stakeholders—from chefs to scientists, from entrepreneurs to government officials—to discuss one key question: Can Food be the Planet’s Medicine? A key part of the discussion was how eliminating food waste could reap environmental gains. She credits this point of view to her upbringing.

“Yes, I am so adamant about not wasting food because I come from a place where so many people, including my mother and my own sister, go to a market and it’s completely empty,” says Schrader.

And her international work does not stop there. Schrader is a “Sisters on the Planet” Ambassador for Oxfam America, a diverse group of Americans aiming to use their influence to fight global poverty, hunger, and injustice, with a particular focus on empowering women and girls worldwide.

She is also a founding member of the Chefs’ Manifesto, a thematic framework for the ways chefs can contribute to the United Nations’ Sustainable Development Goals through simple, practical actions. She has also  worked closely on the EAT-Lancet Commission Report, the first full scientific review of what constitutes a healthy diet from a sustainable food system and what actions can be taken to support and speed up food system transformation.

Most recently, Schrader is using her voice to encourage folks to stay at home during the COVID-19 outbreak. Working with the World Health Organization and Global Citizen, she is participating in a series of online cooking classes called Together at Home.