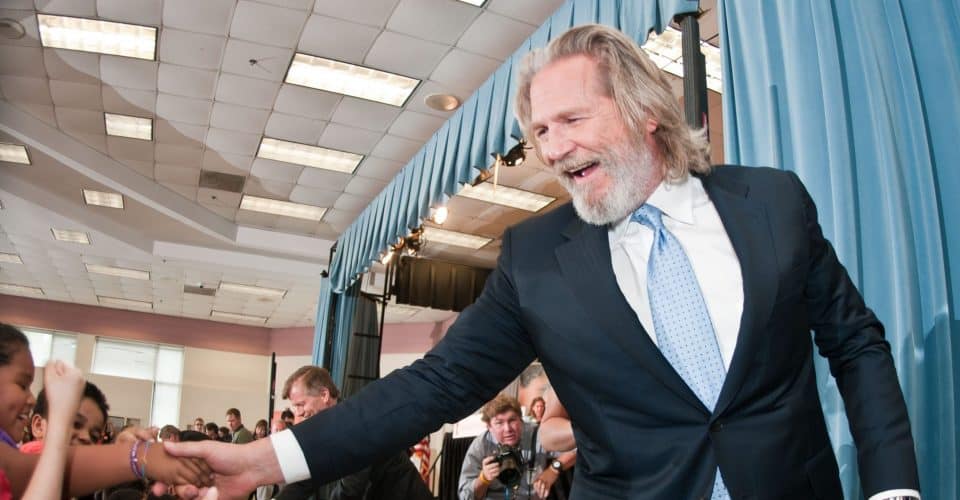 Most famous for: Roles in films such as The Big Lebowski and Crazy Heart

How he got connected to food: After witnessing the famines in Africa in the 1980s, Bridges initially became passionate about combating hunger worldwide.  But, shortly thereafter, when he realized that #children in his own country were struggling, he shifted his attention to fighting hunger within the United States.

What he cares about: Ending childhood hunger

Why he cares about it: Because he is unable to ignore the injustices of hunger

What he is doing about it: Using his #celebrity status to raise awareness of important food issues and to bring attention to  the 13 million children in America who are food insecure

In 1983, alongside other entertainment industry leaders, Bridges founded the End Hunger Network to encourage, stimulate and create media projects, programs and events aimed at ending hunger. Amplifying the voices of writers, directors, actors, celebrities, nonprofits, and businesses, the End Hunger Network motivates U.S. citizens to participate in the growing movement to end hunger.

As of March 1, 2019, the End Hunger Network closed it doors as a nonprofit organization. Over its 36 years of operations, however, the organization made notable contributions to the anti-hunger cause by writing and producing all the #education and fundraising materials for LiveAid, a 16-hour global event for the campaign to end hunger in 1985. And while the network he started may no longer exist, Bridges’s activism lives on.

Since its launch in November 2010, Bridges Share our Strength, a nonprofit working to end hunger and poverty in the United States and around the world. In that role, he has used his celebrity to gain media attention, has taken trips to Capitol Hill, and has even donated all the proceeds from sales of his album, Sleeping Tapes, to the No Kid Hungry campaign. In October 2015, he met with the Senate Agriculture Committee to discuss improving the federally funded Summer Food Service Program that provides meals to kids during the summer months, a critical time when must lose access to the food they receive during the school year.

He also helps raise awareness of other important Share Our Strength programs such #Cooking Matters, which aims to ensure that kids are getting healthy food at home by encouraging low-income families to cook delicious, nutritious and affordable meals.

Interesting stories about Jeff Bridges and his food projects in online media:

As Thanksgiving approaches, Jeff Bridges reflects on his work as an anti-hunger activist for Variety