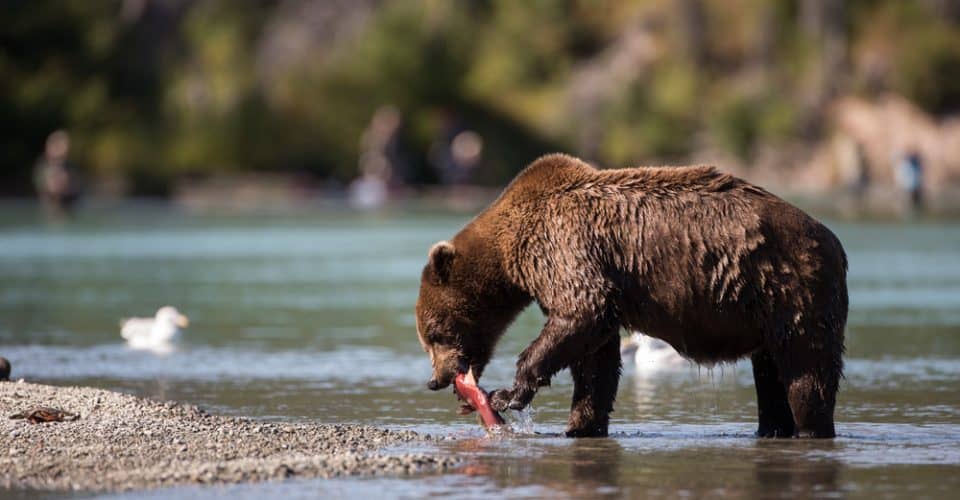 This new series covers what animals eat, when they eat, and how much they consume.

Where they live: North American Brown Bears (also known as Grizzly Bears) are found in small groups across North America but are concentrated in the Pacific Northwest.

What they eat: As omnivores, the brown bear’s diet is more than 75 percent vegetable matter, including nuts, berries, flowers, grasses, herbs and roots. The other 25 percent consists of #protein sources such as rodents, salmon, decaying carcasses, fish, insects, elk and moose calves, and a variety of other small mammals.

When do they eat: Brown bears hunt both during the day and at night but are known to adjust their habits to avoid human interaction.

How much do they eat each day: Brown bears can eat up to 90 pounds of food a day. Before hibernation, they enter hyperphagia for 2-4 months, increasing their #calorie consumption and gaining more than three pounds a day in preparation for their long winter’s sleep. Alaskan brown bears are the largest of the species, and require a very high caloric intake of food.

How much do they drink each day: This varies significantly based on what they have in their environment, but during hyperphagia, “a period of 2-4 months when they intensify their calorie intake to put on weight for winter denning,” the bears had a recorded urine output ranged from 8-16 L/day.

What is the ratio of protein, carbs, fat and fiber: Their #diets are highly varied as they are opportunistic feeders. However, researchers have determined that bears have a target of “17 percent protein to 83 percent non-protein energy intake.”

#Activity level: When they are not in hibernation, brown bears can be active for anywhere between 10 and 15 hours a day. This number changes based on sex, seasonality of diet and temperature. Their activity level is low in the early spring and increases steadily until mid-July. That high activity level is maintained until September and then declines approaching hibernation. If a human were the same size as a 700 pound grizzly and walking for 10 hours a day, the would expend more than 12,700 calories.

Diet related diseases: Salmon Poisoning Disease (SPD) is a deadly disease caused by consuming the bacteria found in the fluke (a parasite) of infected salmon.

Life span: The average lifespan of a brown bear is about 25 years in the wild.

Interesting feeding facts: In and around Banff National Park, brown bears have been documented to eat more than 200,000 buffalo berries in a single day. Also, brown bears in Yellowstone eat approximately 40,000 moths per day in August. Furthermore, ant broods are an important food source for bears. They flip rocks to get to this protein and fat source, and it is what cubs eat as their first solid food.

How their diet relates to human health: Research on the brown bear’s ability to “manage their huge weight transition” by succumb[ing] to #diabetes and then reverse slipping into that state” may help research with diabetes management. Brown bears have changes in their gut microbiome during hibernation that prevent them from suffering metabolic consequences of obesity seen in humans, including insulin resistance and diabetes.

Other interesting food related facts? “When laying down to rest, Alaskan brown bears dig “belly holes” to accommodate their food-filled bellies—the bigger the belly, the bigger the hole!”

According to the National Park Service, “If you see bears only eating the skin, brains, and eggs of a salmon, they are practicing good energy economics. At these times, a bear’s profit margin in calories is so high that it can ignore some excess fish. As a bear fills up on salmon, it can ‘afford’ to not eat certain parts of the fish. This behavior has been nicknamed ‘high-grading’ like miners looking for high-grade ore, bears try to consume high grade fat.

“Salmon are a high calorie meal for a bear. A sockeye salmon contains about 4500 calories, but the fattiest parts of the fish contain the most calories proportionally. Bears know this and prefer to eat the skin, brain, and eggs—the fattiest parts of a salmon—when fish are in abundance. This is an ephemeral behavior, however. When salmon are not abundant or hard to catch then bears will not be as selective and will most often eat the whole fish.”